Artist Lieuwe van Gogh created the sponsor litho SUSHI especially for the Dutch Lithography Museum, together with master printer Gertjan Forrer, thus following in the footsteps of his ancestor Vincent van Gogh as a graphic artist.

Lieuwe van Gogh (Amsterdam, 1991) started painting at a young age and graduated from the Mix Art Academy at the age of sixteen. He is the son of filmmaker Theo van Gogh and a direct descendant of painter Vincent van Gogh, who also experimented a great deal with lithography.

The work of the young Van Gogh is powerful, colourful and expressive. The lithograph SUSHI was created especially for the sponsors and contributors of the Dutch Museum of Lithography.

Van Gogh used the same technique as the world-famous painter in 1885 for the lithograph of his masterpiece The potato eaters. This lithograph is on display in our permanent exhibition ‘The amazing world of lithography’.

By means of lithographic tusche, the image was put on the printing stone. Then the image of the shark was scratched open very precisely.

Become a sponsor or contributor!

Would you like to be the proud owner of an exclusive lithograph by the young Van Gogh? Then become a sponsor or contributor of the Dutch Museum of Lithography! 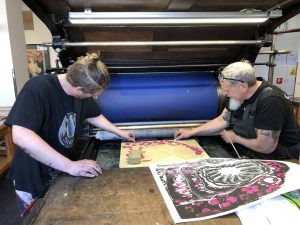 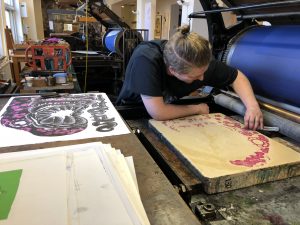 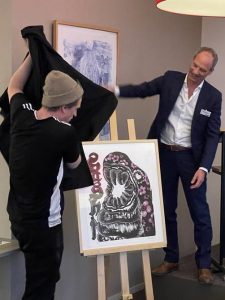 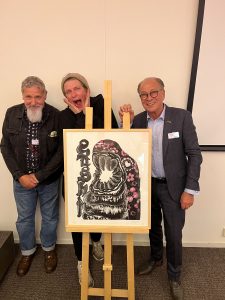 Would you like to see all the lithographs created by Lieuwe van Gogh in the Dutch Museum of Lithography? Take a look at therealvangogh.com.